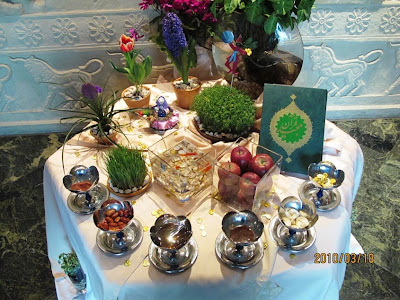 Sofreh Haft-Seen...an illustration
Salaam,
Nowrooz is a traditional ancient Persian festival and also the beginning of Iranian New Year. It marks the first day of spring and the beginning of the year in Iranian calendar. This year Iran's new calendar year begins on Sunday, March 21. Iranians across the world celebrate this ancient tradition for two weeks by visiting their relatives and enjoying the nature's green beauties of spring.
The oldest of Iranian traditions, Nowrooz is a celebration of the social, cultural, national and spiritual identity of Iranians. It is also the longest of all Iranian feasts and its rites are the richest in symbolism.
With the passing of a year and the coming of another, Iranians prepare and sit around a table spread called 'Sofreh Haft-Seen' or the 'Table of Seven 'S' with at least seven items starting with the Persian letter 'S'. Hence the Haft-Seen is a major tradition and symbolism of Nowrooz.
The custom dates back to antiquity, but the practice is still very much alive today. The precise point at which the old year ends and the New Year begin is called 'Saal Tahvil' or Receiving Hour. This year the crucial moment will clock in at 21:02:13 on Saturday (tomorrow) night when families and friends gather around the Haft-Seen table.
The seven decorated items usually placed on the table to symbolize everything that produces, protects and enriches life, are vinegar (serkeh) symbolizes age and patience; apple (seeb) symbolizes beauty and health; garlic (seer) symbolizes medicine and longevity; silverberry (senjed) symbolizes love; sumac (somaq) symbolizes the color of sunrise; a sweet pudding made of wheat germ (samanu) symbolizes sweetness and energy of life (affluence); and a plate of specially raised green sprouts (sabzeh) symbolizes rebirth.
The number seven (7) has been regarded as magical by Iranians since ancient times and is symbolic of the levels of heaven.
Along with the seven items, Muslims usually place the holy Qur'an and Zoroastrians put the Avesta on their New Year table to invoke God's blessings.
A bowl of water is added to symbolize purity and freshness, along with bread, a traditional symbol of life's sustainer. Nowadays, goldfish are also placed in the bowl.
The Haft-Seen tradition has evolved over time, but has kept its symbolism. Traditionally, Iranian families attempt to set as beautiful a Haft-Seen table as they can, as it is not only of tradition and spiritual value, but also noticed by visitors during the Nowrooz visitations and is a reflection of their good taste.
Wassalam. 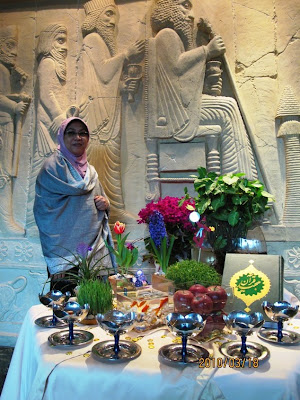 set against the background of the great ancient city of Persepolis... 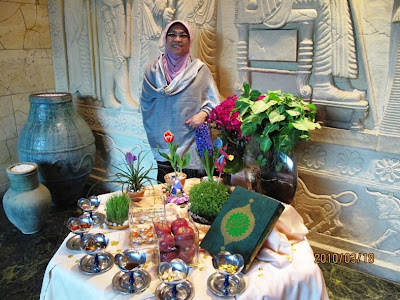 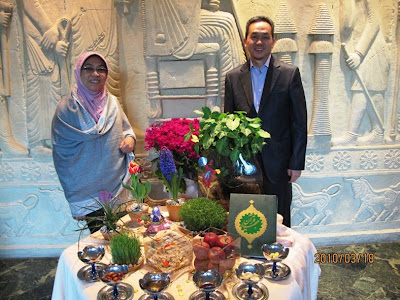 wishing all our Iranian friends 'Sal-e no Mobarak and Nowrooz pirooz'...
Posted by hamsare_mosafer at 12:01 PM