a panoramic view of Jamkaran mosque

Salaam,
During summer last year we decided to take a trip to the city of Qom. It coincided with our son’s summer vacation in Iran; so it was an opportunity for him to visit and explore the province particularly the holy city. Although we usually passed through Qom whenever we drove southward to Kashan or Esfahan, we never had that much time left to drop by and to go around the city. The journey to Qom normally takes only about an hour and a half drive from Tehran.
Qom is Iran’s second holiest city after Mashhad. It was the heartland of the Islamic Revolution and remains one of the most conservative places in Iran. Arriving in the city we could feel the sacred and holistic atmosphere – mullahs and religious students mingling with a steady flow of pilgrims to holy sites and everywhere women wearing the head-to-toe chador.
The primary attraction of the city is the holy shrine of Hazrat Fatemah, reputedly known as Ma’soomeh, the daughter of Imam Musa Kazem AS, and sister of Imam Reza AS. The shrine is considered to be one of the largest and most valuable relics of Islamic architecture of Iran and the world bearing precious remnants from various centuries. However for some reasons, we were not able to enter the holy shrine on that day and had to be content by just admiring its enormous tiled dome and exquisite minarets from the outside. It was also an extremely warm day in Qom, hence none of us managed to capture even a single image of this beautiful masterpiece.
Another significant vestige of the Revolution that we managed to visit is the Khan-e Khomeini, a simple brick house and former residence of the late leader of the Islamic Revolution. Located just east of the Shohada Square, it was here that the late Ayatollah Khomeini lived before he was exiled in the 1960s. We could only tour around the compound of the historical house as the complex is not usually opened to visitors.
One popular pilgrimage site that we particularly spent most of our time was the holy mosque of Saheb-ol Zaman or more popularly known as Jamkaran mosque. It is located at a distance of about six kilometers from the city of Qom, on the Qom-Kashan Road. The Jamkaran mosque, believed to have been founded at least since the Muslim year of 373 Hijrah (984 A.D.), has long been considered a sacred place for the Shiite. Locals believe that the Imam Muhammad al-Mahdi (p), the twelfth Imam, once appeared and offered prayers at Jamkaran.
Hence today Jamkaran mosque is one of the extremely unique, fascinating and interesting sites of Qom province, drawing hordes of pilgrims especially on auspicious day (Tuesday). We were graciously welcomed by the mosque authority who had also kindly granted us a guided tour of one of the most magnificent and historical mosques in Iran. 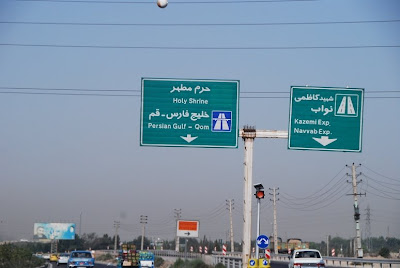 highway to the holy city 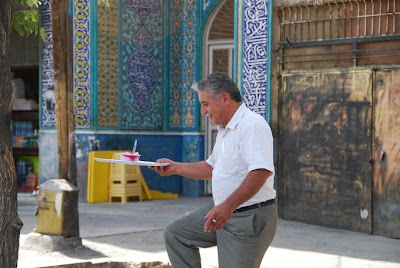 baludeh...anyone? a favorite sweet made with a kind of noodle and syrup 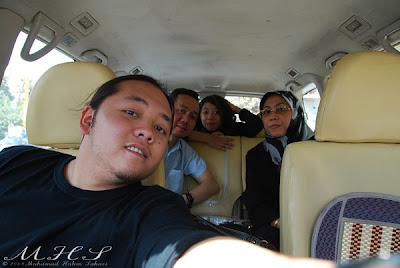 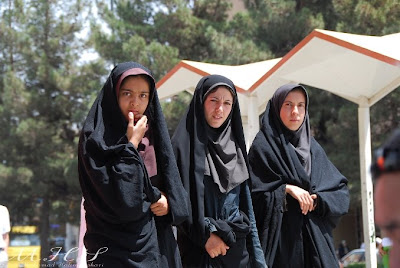 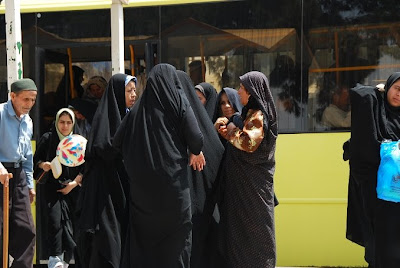 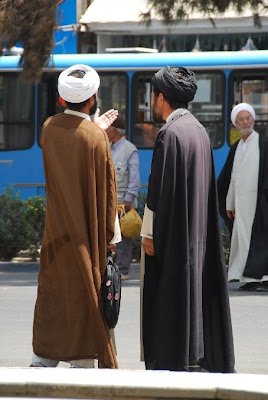 a city of religious schools and scholars 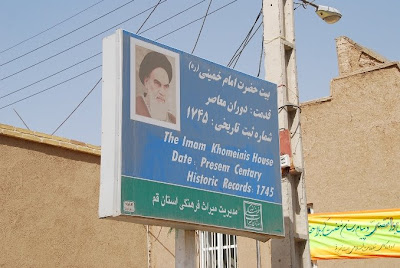 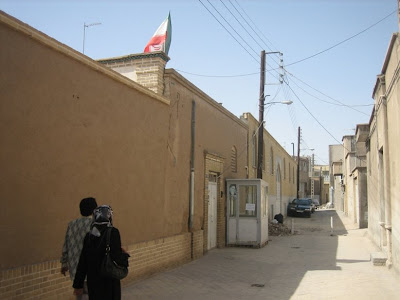 an alley leading to the residence... 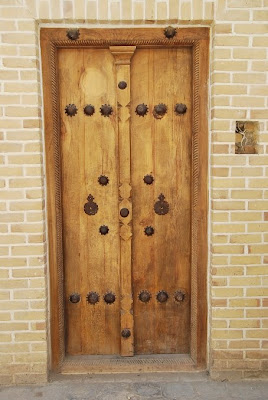 wooden door to the side entrance 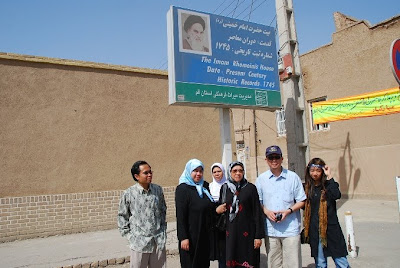 a signboard in front of the house 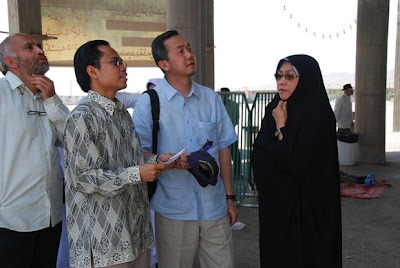 side entrance to Jamkaran mosque 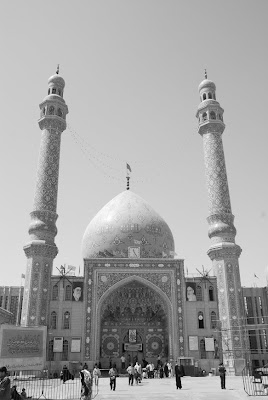 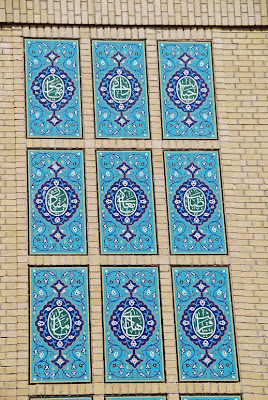 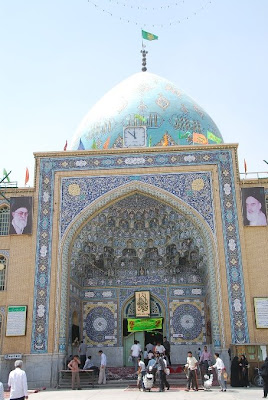 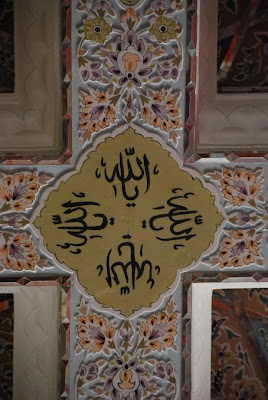 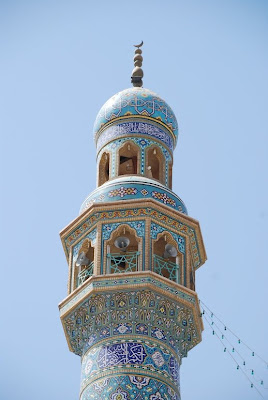 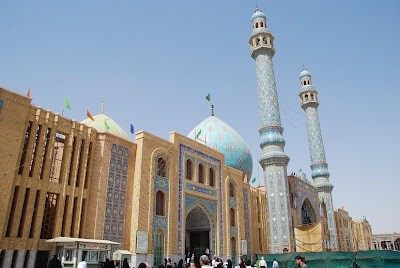 a view from afar 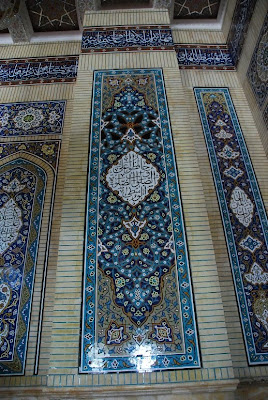 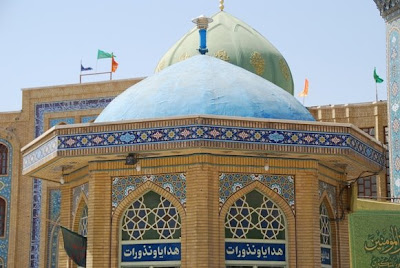 another fine example of Islamic designs 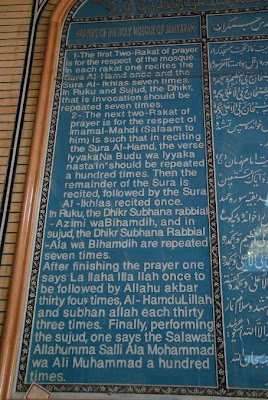 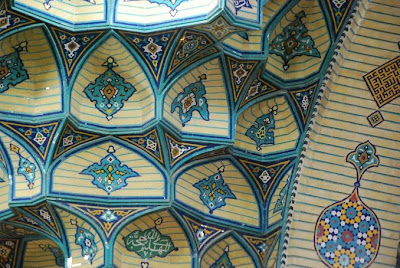 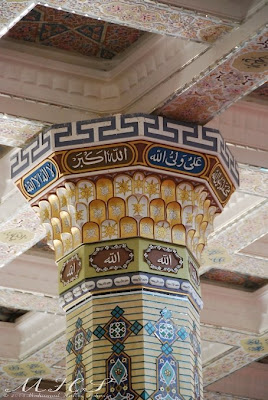 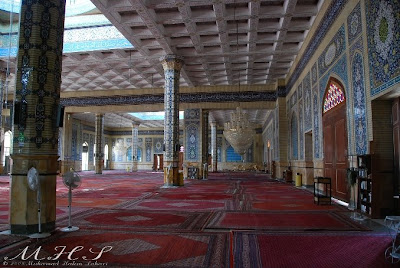