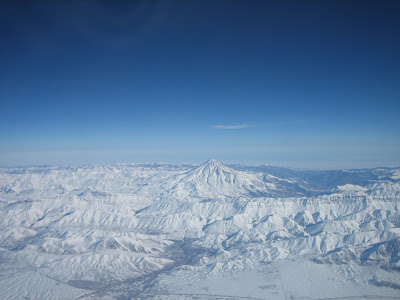 Aerial view of Mt. Damavand on the morning flight
from Tehran to Mashhad
Salaam,
Islam encourages people to travel to all the four corners of the world and observe God’s creatures to acquire knowledge through the world and reinforce their submission to God through the beauty and bounty of God’s creations. Islam also encourages visiting Muslims to strengthen bonds with other Muslims; in other words Islam persuades Muslims to travel to achieve physical, social and spiritual goals.
To many Iranians, Mashhad – Iran’s spiritual centre and holiest city, has been known as the “Place of Martyrdom” or “Place of Burial of a Martyr.” The city is extremely sacred to Shiites as the place where Imam Reza, the eight Shiite Imam and direct descendent of the Prophet Muhammad SAW, died in AD 817. So historically the city was in fact the last home of the eight Imam of the Shiite Muslims. It has since grown to become Iran’s most important pilgrimage centre. More than 15 million pilgrims visit the holy city each year.
My first ever visit to Mashhad was finally realized when the Diplomatic Ladies Group (DLG) of Tehran organized a one-day excursion to the holy city in February last year. The flight from Tehran to Mashhad and back on a Tupolev aircraft took only about an hour, arriving in Mashhad early in the morning. There were altogether around fifteen spouses and a couple of accompanying Ambassadors in the group.
The highlight of the day was a guided tour of the Holy Shrine and its huge complexes conducted by the Astan Quds Razavi Foundation. From the time we landed in the city, the glorious and golden sacred dome of the holy shrine attracted our attention. It was indeed one of the most beautiful religious monuments of the holy shrine, giving solace to both pilgrims and visitors alike.

After lunch, we were finally ‘liberated’ and granted the equally important itinerary in every ladies program – the opportunity to look and shop around the 800-meter long Bazaar-e Reza nearby (managed to buy some turquoises, saffron and prayer beads (Shah Mahsood) though, of which Mashhad are famous for) Later in the day, we also had the opportunity to visit the mausoleum and home town of the epic poet, Ferdowsi, some 23 km from Mashhad. It was indeed a lovely place, and an easy trip from the holy city.

Despite the time constraint, the visit was very well-arranged and worthwhile. Arriving back in Tehran with an alluring and captivating image of the city, still fresh in my memory.
Wassalam. 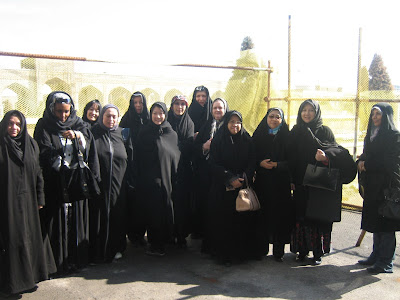 Well-dressed in their 'chador' before entering the holy site 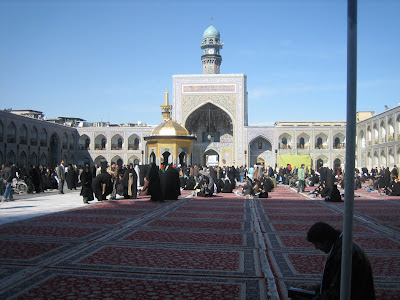 The upper tower of the southern balcony 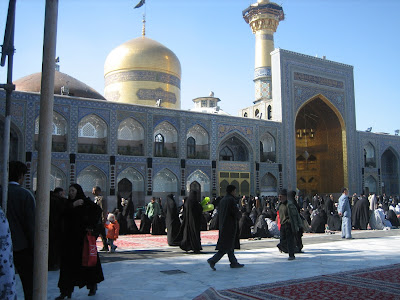 The Sacred Dome and one of the minarets 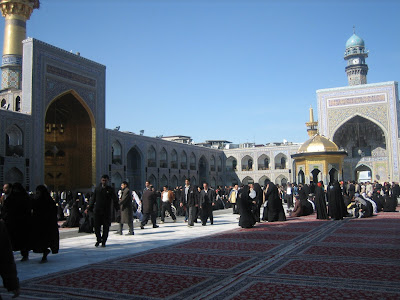 Sacred premises of the holy shrine 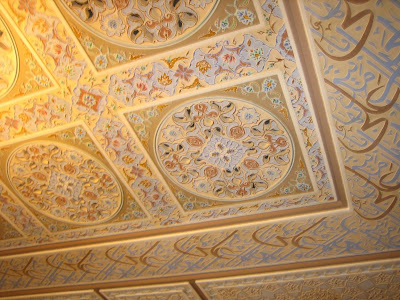 Decorative ceiling of the Quran room of Hazrat 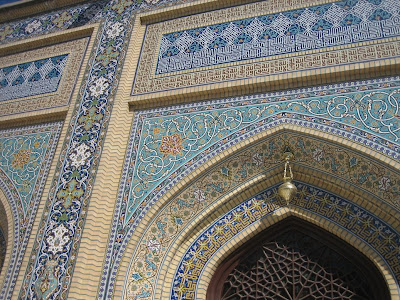 Entrance to the Central Library of Astan Quds Razavi 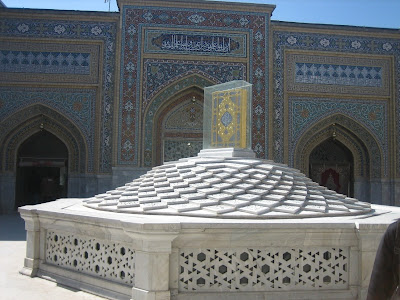 Stature of the holy Quran 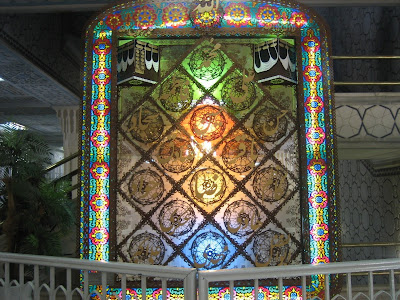 Names of household of the Prophet SAW 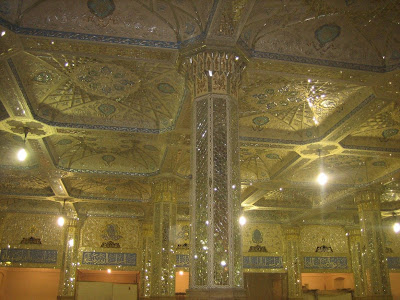 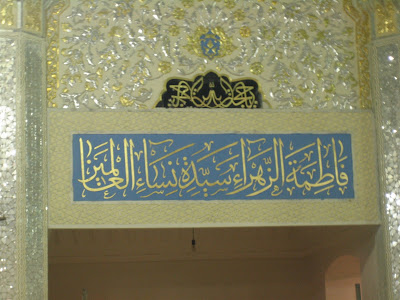 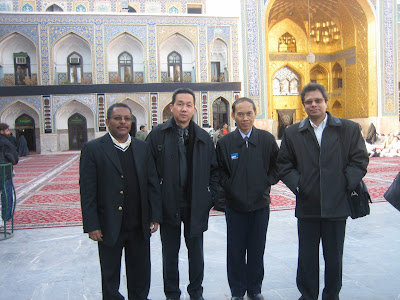 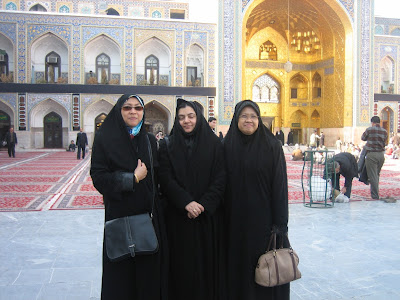 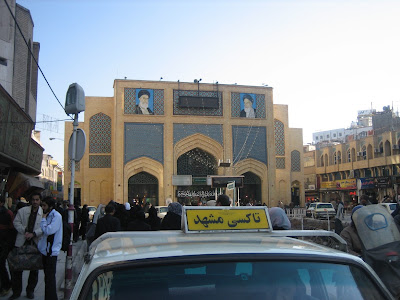 Entrance to the Bazar-e Reza 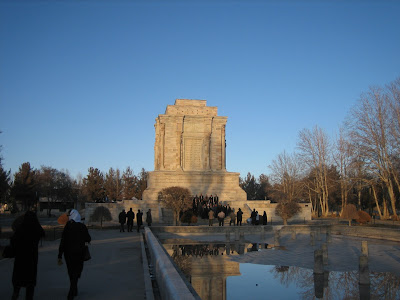 Mauseluem of Ferdowsi in Tus 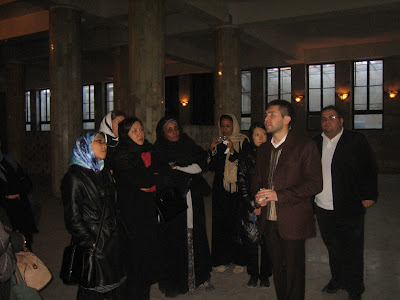 Briefing on the history of the epic poet 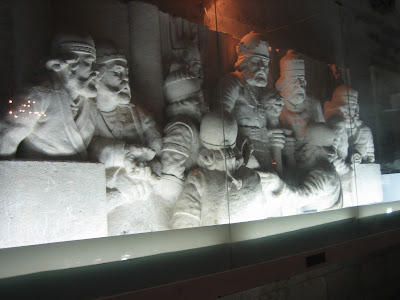 Collection of ceramics and pottery inspired by Ferdowsi 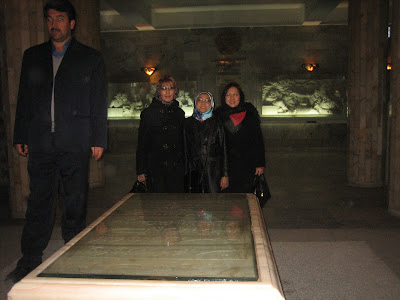 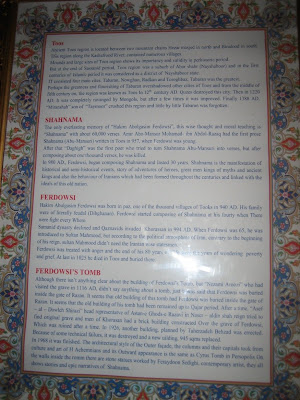 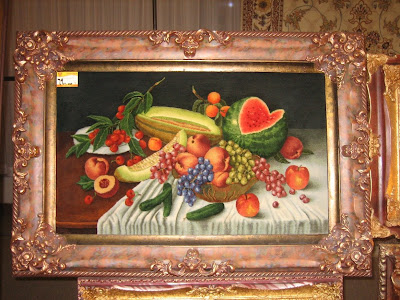 Found this beautiful piece at Homa hotel and instantly fell in love...

Posted by hamsare_mosafer at 10:12 AM