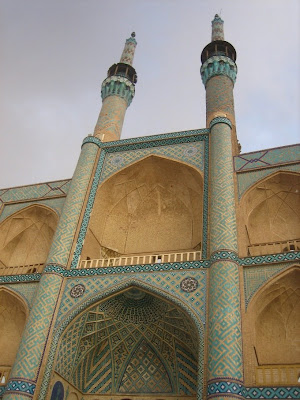 Salaam,
For those who love profound beauties of nature, I suggest Yazd should be included in the itinerary of your next provincial visit in Iran.
The central province of Yazd is one of the oldest and most historic pieces of lands, located among the old and large provinces of Fars (Pars), Esfahan, Kerman and Khorasan.
It was still early spring when we embarked on our first trip to this ancient city in early April last year. Located in a vast dry valley, about 677 km south of Tehran, Yazd has a dry and semi-dry climate with hot summers and cold winters. When we arrived, the weather was still kind to us and moderately mild especially in the morning but becoming warmer during the day.
Mehr Traditional Hotel, where we stayed for the night, is said to be one of the beautiful monuments and architectural masterpieces with 200 years of antiquity in Yazd. UNESCO has recognized Yazd city as a city having the second oldest architecture all over the world.
Beautiful pool, colorful panes, lofty wind catchers, wooden doors, parlor, front piece five doors, vestibule edifice, threshold, dais, Qanat, cellar, anti-room, Orangery. All in all are constant reminders of bygone eras. This hotel is located in the historic quarter of Yazd adjacent to old bazaar such as Zargari, Shahzadeh Fazel and Khan Bazaar as well as the Arg complex (historical texture).
Being located within the old city itself, it was just the perfect starting place to get a feel for the region’s rich history. We spent the whole evening touring the labyrinth of narrow alleys crisscrossing the various old monuments such as old houses made from sun-dried mud bricks, Alexander prison, museum, huge ancient fortresses and fortifications and numerous shelters.

However the two most striking and prominent features of this province are its distinctive badgirs and qanats.
Badgirs, wind catchers or wind towers, in the shape of square or octagon and staircase, are the most beautiful elements of old and, sometimes, new buildings of the city of Yazd. It is the most distinctive feature and architecture of this city. The wind catcher at the Mehr Hotel where we stayed is one of them. Badgirs are ancient systems of natural air-conditioning, designed to catch even the slightest breeze and direct it to the rooms below. The ventilation structures (wind catchers) were the most important means by which the interior became cool. So it was only the clever architecture of this building that enabled the people to tolerate the hot summer of the province. Hence Yazd was (and still is) called the city of wind-catchers.
Yazd is also famous for its Qanats or underground water channels. It is an ingenious ancient method or irrigation system, by which underground mountain water is tapped and the water channeled down through a series of tunnels to the ground level. When there is less need for water, it is stored in reservoirs to be used in the summer. Iran is thought to have more than 50,000 qanats. When we visited Kerman, for instance, we could also see similar irrigation system existed in many parts of that neighboring province.
Besides the numerous monuments and memorials of Islamic era such as the magnificent Jameh mosque and Imamzadeh mausoleums, the province of Yazd is also home to the largest population of Zoroastrians in Iran, the ancient religion of Persians. The catacomb or cemetery of Geber in the Persian culture, houses the holy fire, which is cherished by Zoroastrians. One such fire temple which we visited, called Atashkadah, contained a sacred flame said to have been burning since about A.D. 470.
A one night stay in the city of “Darol’ebadeh” (a title given to Yazd after the emergence of Islam in Persia) was indeed too short a time to really explore this beautiful city. Nevertheless it was such a wonderful experience to observe all the marvelous and remarkable features this province has to offer. So to all dear readers who are particularly interested to learn more about ancient Persia, I suggest Yazd is one such destination worth a while visiting.
Wassalam. 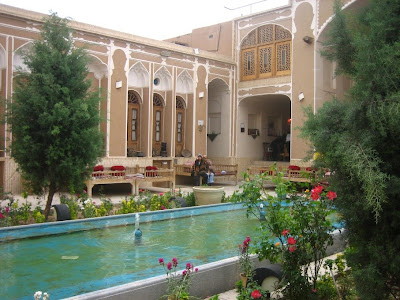 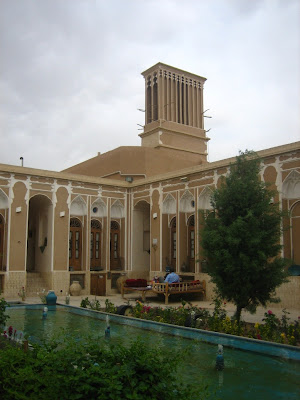 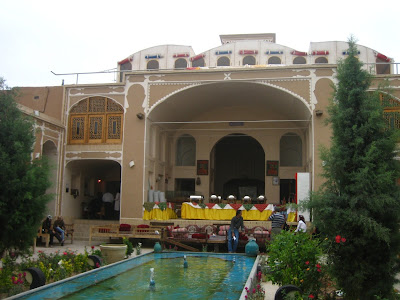 another view of the garden 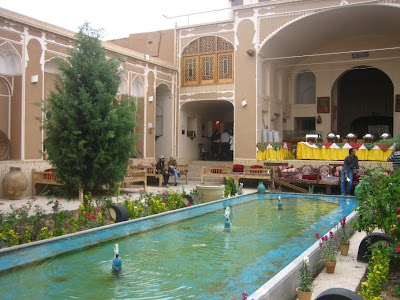 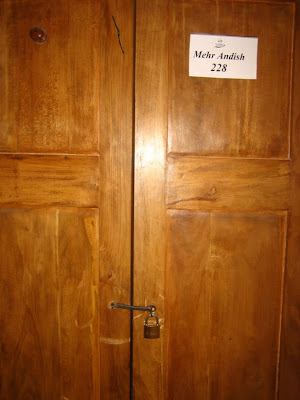 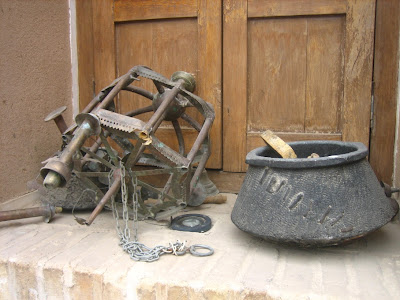 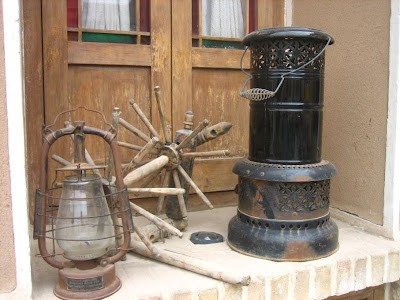 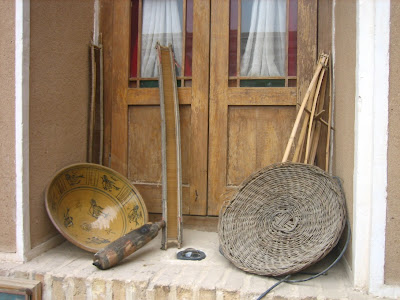 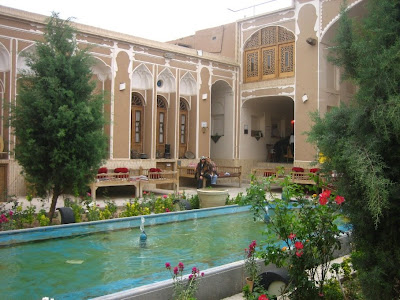 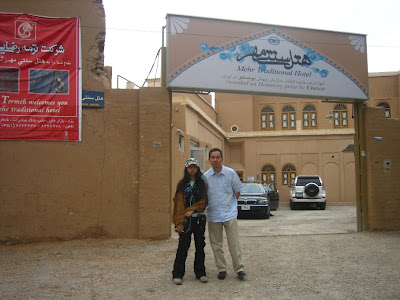 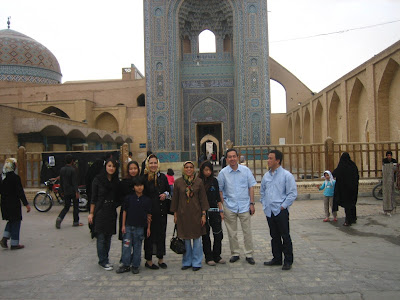 main western entrance to the mosque 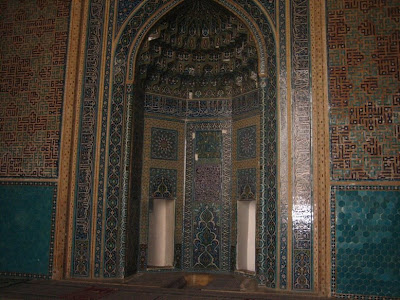 exquisite and beautiful mosaics on the mihrab 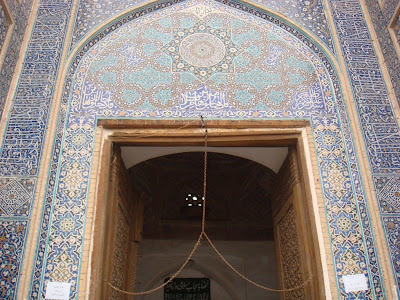 another stunning view of the entrance 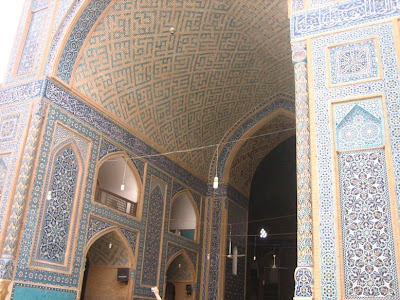 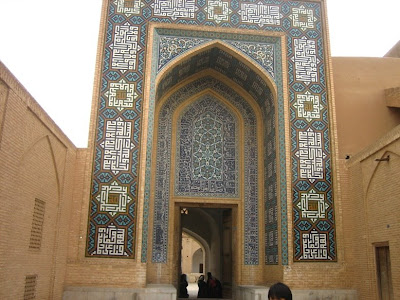 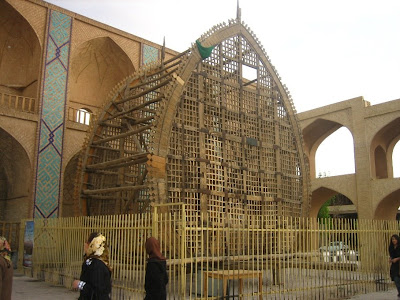 wooden structure used during religious rituals
such as ashura procession 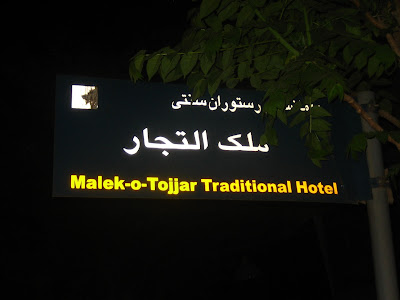 direction to the restaurant 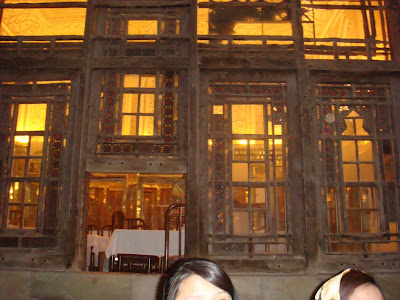 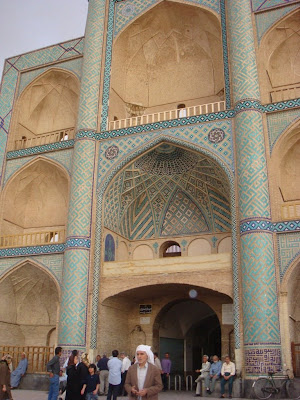 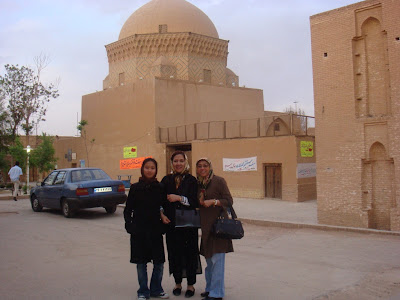 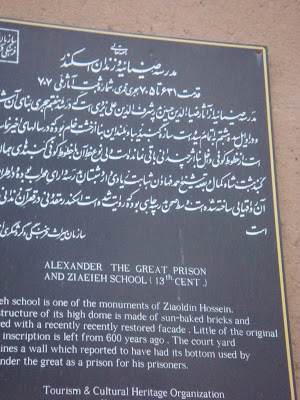 inscription on the Alexander's Prison 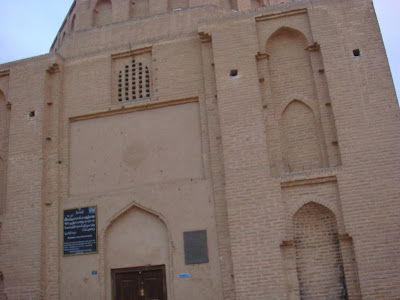 the renovated building itself in the old city 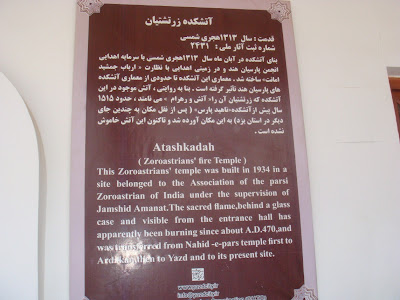 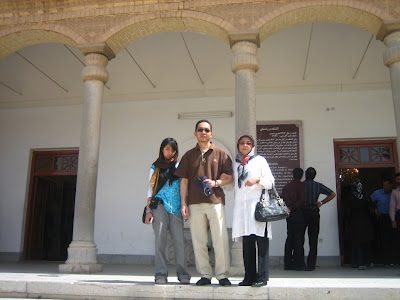 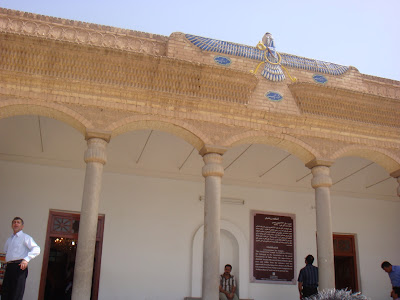 symbolic bird-man symbol of Zoroaster
Posted by hamsare_mosafer at 12:07 PM